A day out with the honeysuckers

Working in sanitation throws up many interesting possibilities and questions. One such question was about the ‘hidden taskforce’ of septage management – the desluding workers – who work behind the scene, who are hardly acknowledged, but who are the prime players in septage management. Theoretically, we know that unless the collected septage is carefully desludged and safely transported from the containment structures to the treatment plant, no amount of securing the rest of the links in the sanitation chain would ensure safe sanitation. However, we barely interact with the desludging operators and know far less about their work on a day-to-day basis.

With dry toilets being declared illegal, and more and more houses moving towards toilets with septic tanks, a set of budding entrepreneurs are appearing in the market with their vacuum trucks known as honeysuckers to empty the septic tanks for a small fee. We also read regular articles in the media about illegal dumping of septage into water sources and open grounds, which creates a huge health as well as environmental hazard.

Before he turns in the ignition key, let me introduce you to Kumar, our lorry driver. A resident of Sathyamangalam, Kumar travels around 70 kms each day to reach his workplace in Coimbatore. Around 8:30 am, each morning, Kumar teams up with another one or two people and sets out on that day’s business. Today, he has one assistant, Muthu with him, but since the two of us are also around, he has asked Muthu to go and sit on top of the vacuum tank, while the two of us take our place next to the driver. Once we are comfortable, Kumar informs us that we are going to a poultry farm near Kaattampatti for the first desludging operation of the day.

Two hours along the Pollachi Highway brings us to Kaattampatti. We make our way to one of the largest poultry farms in the district. As soon as we enter the premises, a couple of workers come our way with cans of phenyl, which they pour on the lorry to disinfect it. The ease with which the entire exercise is carried out makes us realise that the farm is among Kumar’s regular clients. After the ‘disinfecting’, the lorry proceeds to the place where the septic tanks are situated.

Once the ignition is switched off, we watch in amazement at Kumar’s metamorphosis. He is no longer the chatty person who was sitting beside us behind the wheel. He jumps down from the driver’s cabin, reaches the septic tank and breaks open the sealed manhole with a crowbar. In an equally well-coordinated move, Muthu pulls down the extension hose from the top of the truck, connects it to the valve embedded on the tanker, and pushes the other end into the septic tank. Thanks to the vacuum suction technology, the vacuum tank is filled with 5000 litres of septage in a few minutes. Throughout the entire process, Kumar has kept a careful watch on the volume gauge mounted on the tanker.

While this entire exercise is taking place, Suresh and I introduce ourselves to the staff of the poultry farm. After some initial hesitation, some of the workers began speaking to us. We get to know that close to 90 workers work and live on the poultry farm. They share common sanitary facilities, which are spread around the farm, and on an average around 15 lorry loads of septage was being generated by the farm every month. Our jaws drop on hearing this number. “Where do they take so much septage? What is the disposal mechanism,” was the question on our minds. We keep a straight face and ask Kumar where the nearest dumping location was. “Oh, I have an arrangement with the nearby farmland,’’ he says confidently. “We will go there in a while,” he adds. 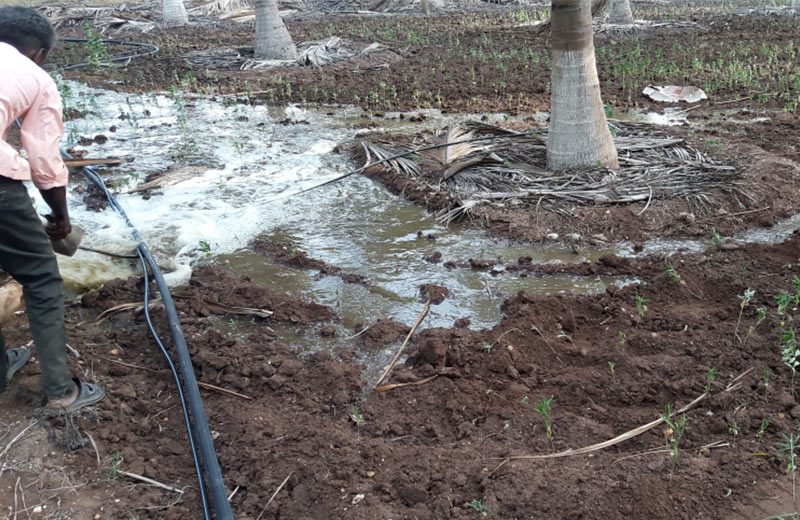 Surely enough, half an hour later we are at a large coconut grove. With the farmer’s wife supervising the unloading, Kumar and Muthu empty the entire tanker into the groove. We take the opportunity to speak to the farmer’s wife. She tells us that her farm receives around 20 loads of septage every couple of months. “It is not only from the poultry farm, we have an arrangement with a couple of other places for regular supply of septage,” she says with a smile. Her husband who had joined her tells us that the septage is very important during dry spells when the farm faces acute water scarcity.

Soon it is time for lunch. The owners of the farm invite Suresh and me to join them for lunch. Kumar and Muthu have brought their lunch along with them. They go to a nearby tap and begin washing up. I watch as Muthu fumbles around in the driver’s cabin and pulls out a used detergent soap wrapped in a newspaper, which he and Kumar use to clean their hands and feet. The sight is a kind of relief for us, as we had observed the two carry the hosepipe from one septic tank to another on their shoulder, wiping the spillage with their bare hands!

Once lunch is done, the work continues. Kumar and Muthu take turns building mud bunds around the coconut trees, with their bare hands, to prevent spillage and overflow. The farm owners’ small children continued to play in the vicinity. One toddler keeps coming to Kumar and Muthu and the duo keep embracing him, carrying him, playing with him throughout the time they are working.

It is late in the evening, when the work is done. It is time to head home. On our way back, we find out that both Kumar and Muthu had dropped out of school and taken up this profession. Kumar earns close to Rs 17,000/- per month, while Muthu earns Rs 12,000/- .
As we near Coimbatore, we stop at a roadside teashop. “Take that smelly truck away,” someone shouts from inside. We look at Kumar. He has a defiant look on his face, but his voice trembles as he says, “There is no point in getting into a brawl. This is our profession and we are proud of it.