Is your child’s shit affecting your health?

It was September 2008. It took me almost two-and-a-half hours to reach G-plot, one of the remotest islands among the deltoid labyrinth of Sundarbans. My colleague – a native to G-plot was waiting to receive me at the jetty. We got on a van fitted with a motorcycle engine, popularly known as Vano in this part of the world. Assaulting our eardrums with more than 85 decibels and leaving behind a deep dark trail of fume, the Vano set out for Satyadaspur, one of our intervention villages in G-plot. Reaching the destination, we immediately jumped into action and rushed to meet the beneficiaries who had built their household toilets under the Total Sanitation Campaign Programme.

We reached a house located near the centre of the village. Stepping into the yard, I noticed a small child defecating on the other side of the premises near a bush. We knocked on the door and a lady in her mid-twenties came out. My colleague introduced me and told her the purpose of our visit. The lady welcomed us indoors, offered us a glass of water with sugar candy and started answering my questions. I was curious to know whether all members of her family were using the toilet. She answered in the affirmative. I pointed to the toddler and asked if he was using the toilet. With a chuckle she replied that the toddler could not sit on toilet. There was a danger of his falling down and injuring himself. The lady then took a mug of water and got busy cleaning the child. Once she had finished washing the child, she wiped her hand with her saree and continued talking to us. The shit was lying unattended.

“Don’t you use soap after going to the toilet?” I could not resist asking. “Of course we do. In fact, after using the toilet the women bathe in the village pond and only then get into the kitchen.” Seeing me staring at the child who had just finished defecating in the open, she said. “Öh, him? He is not even three, his stool is not harmful at all.”

June 2014 – Odisha: While entering a large slum called Bapuji Nagar Railway Basti right in the heart of Bhubaneswar, a familiar sight of a small child defecating on a newspaper caught my eye. After some time, an aged woman, probably the child’s grandmother picked up the shit, wrapped it in the newspaper and threw it on the nearby railway tracks.

Unlike in the earlier case, none of the families in Bapuji Nagar Railway Basti had their own toilets. Adults used the railway track in the wee hours of the morning or late at night. Since it was not safe for children to use the tracks, an alternative arrangement was made using the toilet.

February 2017 – Tamil Nadu: We arrived at a small town to do an assessment of a community toilet. The toilet block was full of faeces indicating a high prevalence of open defecation. A little probing showed that while adults from the neighbouring slums were using the community toilet, children were using the toilet premises itself.

These three instances from different parts of the country indicate a widespread perception about children’s faeces not being harmful. According to the NFHS 3 (2005-2006) data, stools of around 79 percent children in India are disposed of unsafely. Two subsequent studies in rural Odisha and West Bengal show that the prevalence is around 81 percent (Majorin et al, 2014) and 72 percent (Preeti PS et al, 2016), respectively. The commonly held belief that faeces of infants and young children is not harmful is untrue. There is evidence that children’s faeces could be more harmful than that of adults due to higher prevalence of diarrhoea, Hepatitis A, Rotavirus and E Coli in children (Feachem R G et al, 1983).

Often impact of poor sanitation and hygiene is measured by the effect it has on children, either in terms of infant mortality or morbidity due to diarrhoeal diseases, loss of intellectual capacity due to stunting or worm infestation. However, most sanitation and hygiene interventions target adults. According to JMP[1] 2015, globally 68% population have access to improved toilets[2]. These estimates are based on the households’ primary sanitation facility and may have overlooked the disposal practices of faeces of young children. In many cases children might have access to improved toilets, but are not able to use it because of their age, stage of their physical development or just because of safety concerns of their caregiver.

In 2015, the Water and Sanitation Programme of World Bank released a research brief on management of child faeces. In this paper, the methods of disposal of children’s faeces from 26 locations across Africa, East Asia and Pacific, Latin America and South Asia were presented (see charts). The key findings from the research showed that faeces of children under the age of three was less likely to be safely disposed of than that of the adult population, across the three study sites. Not surprisingly, there was a higher rate of unsafe disposal of child faeces in populations practicing open defecation. Households with access to improved toilets have also reported exhibiting unsafe disposal traits when it comes to child faeces. This clearly shows that the belief that child faeces is less harmful is equally prevalent in many parts of the globe. 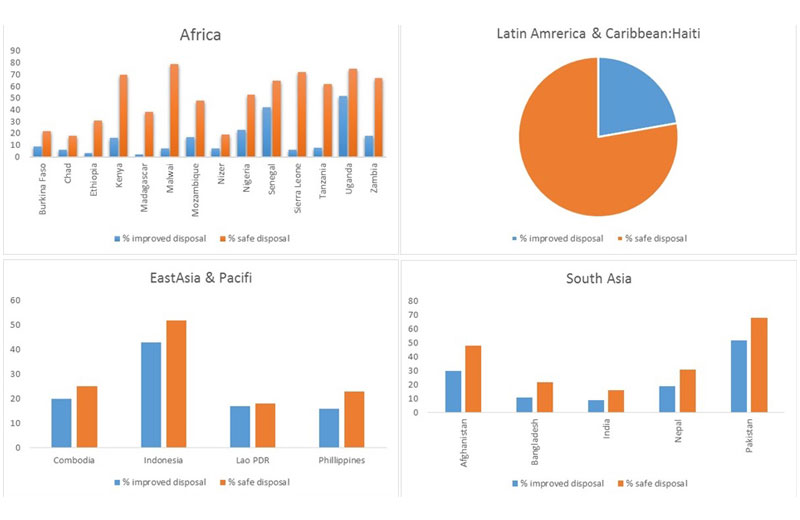 Despite such empirical evidence, sanitation for children has been a neglected area of research, policy and programme. There are significant knowledge gaps in this domain, and it is evident that we are trying to estimate the magnitude of the problem by referring to pretty outdated data. Nevertheless, to reach the proposed Sustainable Development Goal of universal coverage or end of Open Defecation by 2030, we must ensure that children’s faeces is disposed of safely. The World Bank report is undoubtedly indicating that India is far behind its neighbouring countries like Pakistan, Afghanistan and many countries from Africa, East Asia and Pacific in terms of safe disposal.

However, we are already witnessing an increased international acknowledgement of the importance of monitoring the practice. The Joint Monitoring Programme on Sanitation has recommended that the “percentage of children under five whose stools are hygienically disposed of” as a sub-indicator under the eliminating open defecation target.  Our own Swachh Bharat Mission also has laid “effective disposal of child faeces” as an essential indicator for obtaining an Open Defecation Free certificate. 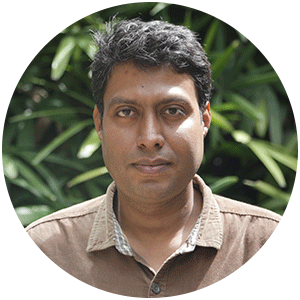 [2] The JMP standardized definition for an improved sanitation facility is one that hygienically separates human excreta from human contact.