Job risks, no benefits: Why govt health camps for sanitation workers are key

Featured in The News Minute

At 1.45 pm on a Wednesday afternoon in Narasimhanaickenpalayam, a town panchayat 14 km away from Coimbatore, a frail-looking woman walks into the panchayat office. She wears a blue overcoat provided to sanitation workers, with her name, Manimekalai*, embossed on it. Manimekalai signs the attendance register at the town panchayat office every morning at 5.45 am, after which she and other sanitation workers are taken in a tempo and left at a designated location. She then collects waste from at least 400 households with a pushcart.

It’s physically demanding work and it requires a high level of endurance during the two shifts that sanitation workers are given — 6 am to 11 am and 2 pm to 5 pm. But for Manimekalai, the struggle is worsened. Though she’s only 33 years old, her tired, dull eyes make her look much older. “My elbows and knees hurt,” she says, as she sits on the chair placed outside the town panchayat office. “This work has taken a toll on my health.”

Manimekalai suffers from anaemia, and joint pain and also has issues with her menstrual cycle — all concerns she only recently had checked out after attending a health camp.

“All these health issues surfaced within five years of joining sanitation work,” says

Manimekalai, who has been a sanitation worker for the last 12 years. “I had no money or time to visit the hospital earlier. It was during the health check-up that I told the doctor about the irregular menstrual cycle and joint pain.” 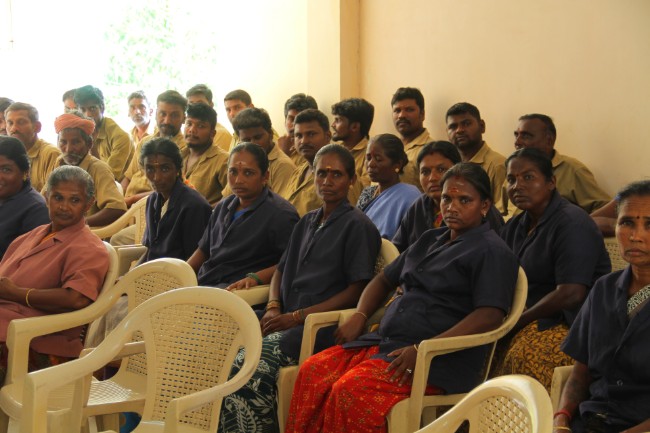 Health camps for sanitation workers are mandated, according to the Prohibition of Employment as Manual Scavengers and their Rehabilitation Rules, and health camps in Tamil Nadu were instituted as part of the Tamil Nadu Urban Sanitation Support Programme (TNUSSP) that was launched in 2015. TNUSSP is part of the Indian Institute for Human Settlements (IIHS), and works with the Tamil Nadu government on the full cycle of sanitation from containment to disposal.

These camps are crucial as the workers play a key role in the cycle of sanitation, and face several occupational health risks.

As part of this programme, health checkups were first initiated in two town panchayats in Coimbatore – Periyanaickenpalayam and Narasimhanaickenpalayam – in 2017.

The benefit was eventually extended to the desludging operators. Desludging operators collect fecal sludge from septic tanks through vacuum trucks, and are mostly private operators, not entitled to any government benefits.

These checkups were facilitated by Keystone Foundation, which partnered with TNUSSP, along with the support of KR Hospital in Coimbatore and a team of doctors from Karpagam Hospital in Pollachi. Up until now, eight health camps have been organised for the sanitation workers and desludging operators. Now, the workers in Karamadai, Gudalur, Veerapandi will soon benefit from the programme.

Rani*, 50-year-old sanitation worker, added that women suffer the most. “Pushing heavy vehicles for long hours has consequences on our health,” she said. “We do not realise this when we are young. The problems compound as we grow old.”

“Several women workers having gynaecological problems, they suffer in silence,” she added. “They are either unaware of the specialists whom they should approach to address these health issues or reluctant to talk about these problems. In addition to working outside, we have to come home, do the household chores, look after our children and husband. We do not even get time to eat food on time, leave alone having nutritious food. There are not many hospitals around here that provide free treatment or medicines for our ailments. How can we spend our hard earned money on medicines alone?” 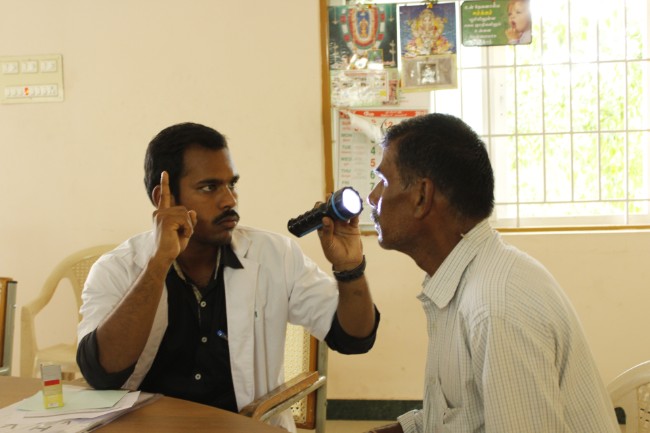 Dr A Naveen Prabhu, a public health specialist, in Karpagam Medical College and Hospital in Pollachi, one of the hospitals that was tied up for TNUSSP programme, confirmed that the workers in Coimbatore suffered from both communicable and non-communicable diseases. The medical team found that skin infections and alcohol abuse were common among the workers.

“A majority of the workers skip their breakfast because of work, and gastritis complaints are common,” said Dr Prabhu. “They do not wear masks, gloves, head cap or even full sleeves. They do not have a washing area where they could take a shower after work. They end up carrying the infection home. Prevention is the only cure for the high-risk groups.”

Desludging operators are also at a higher risk since they are often exposed to extreme levels of health hazards such as harmful gases including methane and hydrogen sulfide. Constant exposure to these gases could lead to cardiovascular degeneration, musculoskeletal disorders and pulmonary function parameters.

Several workers approached the doctors with their ailments only at the health checkup programmes. It was observed that poverty and lack of awareness stopped them from reaching out for medical help unless it was an emergency.

“The money we earn is not even sufficient to even meet our daily needs,” said Raja*, 55, a sanitation worker. “We go to the hospital only when there is an emergency. Otherwise, we bear the pain and stay at home.”

Another reason for their reluctance is the lack of health benefits to the workers. In Tamil Nadu, sanitation workers are recruited on a contract basis through certain groups. Only a small percentage of the workers are on government pay-roll. Desludging operators are completely left out of the benefit of health check-ups since they are private operators.

The 2017 directive for mandatory health check-up

According to the Prohibition of Employment as Manual Scavengers and their Rehabilitation Rules, 2013, regular health check-up for sewage workers are expected to include examination of respiratory organs, skin injuries, other occupational diseases and injuries and their treatment. They should also ensure that sewage workers afflicted with such diseases or injuries do not enter the sewers for cleaning.

The workers, the law states, should also be given regular vaccination against respiratory and skin disease and other occupational diseases due to exposure to harmful substances and gases in sewers.

In view of this, the National Urban Health Mission under the National Health Mission had issued a directive in 2017 to all the urban local bodies to organise health check-ups for sanitation workers and ragpickers. This directive, however, has not yet been implemented by the Tamil Nadu government.

To create a model and formalise this system in Tamil Nadu, TNUSSP team in Coimbatore initiated the health check-up for sanitation workers and desludging operators. 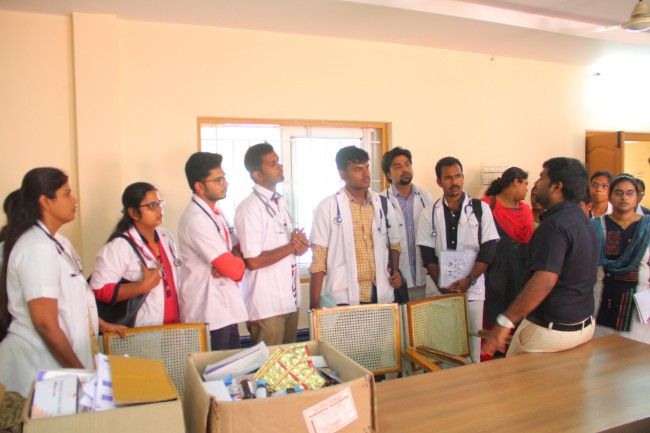 To implement the health camp programme, the TNUSSP had to try out different models. In the first camp in Narasimhanaickenpalayam, they tied up with KR Hospital. This private hospital could provide general consultation and prescription without medicine. The same method was followed for the health camp in Periyanaickenpalayam.

The major challenge faced while conducting the health check-ups for the workers was in providing medication to the workers, which arose from the administrative set-up of the state: Tamil Nadu has 528 town panchayats, carved out of the village panchayats, and the directive to conduct health checkups has been given only to the urban local bodies and not rural bodies. Since the government hospital for the residents of Periyanaickenpalayam and Narasimhanaickenpalayam is located in the rural area, the hospital is not obliged to follow the directive and provide medicines based on the health camp prescriptions.

To address this problem, the TNUSSP team in Coimbatore reached out to other sources, and Karpagam Hospital volunteered to send a full-fledged medical team to provide general health check-up with free medication and referral service. With this support, health check-ups were conducted and medicines supplied to the sanitation workers and desludging operators.

Attempting these different models will help prepare a plan that will be proposed to the state to develop a standardised procedure for regular health checkups for sanitation workers. The ideal model will lay down a list of requisite specialised doctors, the frequency in which health checkups should be conducted, the follow ups, required and a system to provide health cards.

The organising team felt that health cards for the sanitation workers and desludging operators would be beneficial to keep track of the workers’ health condition and help the workers be aware of and avail the welfare schemes. The role of panchayats is also being emphasised in maintenance of health records of the sanitation workers and for the collaboration with local hospitals for better facilities.

The health checkups being conducted now will also help in identifying the pattern of health ailments affecting these workers. The government can decide whether to work this out at the state-level with the existing infrastructure or go for a public-private partnership model.

S Senthalir is an external consultant for the Indian Institute for Human Settlements.