Featured in The Wire

COVID-19 has brought to the fore a section of frontline workers who have till date been relegated to the margins. The significance of the work carried out by sanitation workers, their health, pay and the contractual structure within which they function have all been debated over the last two months.

What has failed to garner attention is the menstrual health of women sanitation workers, who struggle to carry out their work amidst the pandemic with minimal or no WASH infrastructure accessible to them.

The World Health Organisation (WHO) defines WASH as the collective term for Water, Sanitation and Hygiene. Recognising the combined impact of these areas on public health, these have been combined together.

The WHO has said that ensuring good and consistently applied WASH and waste management practices in communities, homes, schools, marketplaces, prisons and health care facilities will further help to prevent human-to-human transmission of the novel coronavirus. 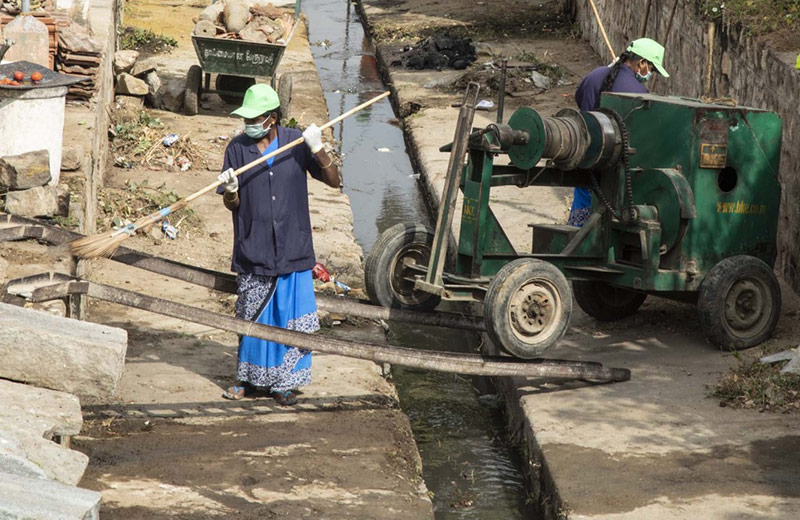 In India, about 80% of the waste pickers are women, according to a WEIGO study. The nature of their work – walking long distances pushing tri-cycles – and their workspace, which is literally is on the street with minimal WASH facilities, exposes them to health hazards especially during menstruation.

Thirty-seven-year-old Ranjani*, a sanitation worker in Tiruchirappalli, walks door-to-door every day to collect garbage in eight streets in ward number 65 in D Nagar. Her day starts at 6 am and ends at 6:30 pm. The only time she gets to change her sanitary napkin is during her lunch break.

“I carry an extra sanitary pad in my lunch basket and leave it at the ward office before I go to work,” said Ranjani. “There are no proper toilets in the streets where I go to collect garbage. I use the one in the ward office, when I go there during lunch break,” she said.

She is a contractual worker attached to micro compost yards. She has to start work by 6 am, leaving for streets to collect solid waste till one in the afternoon. After 2 pm, she, along with other workers, segregate waste into degradable and non-degradable waste till 6 pm.

Her husband works as a daily wage labourer. She was married off at the age of 15 and has three children. Her wages are the only reliable and consistent source of income for the family.

Ranjani said that she suffers from bruises on her thighs during menstruation because of the long distances she has to walk to collect garbage from households. Pushing a tri-cycle further aggravates her problem. The only remedy she follows is the application of oil or talcum powder. “After I reach home, I take a hot water bath and apply oil on rashes,” she said. “Due to the coronavirus outbreak, doctors visit us thrice in a week. We have told them about our problems. They have given us some powder to apply.”

Every month, during their periods, women sanitation workers suffer from frequent infections, rashes and bruises on their thighs because of many hours of walking and the inaccessibility to toilets. 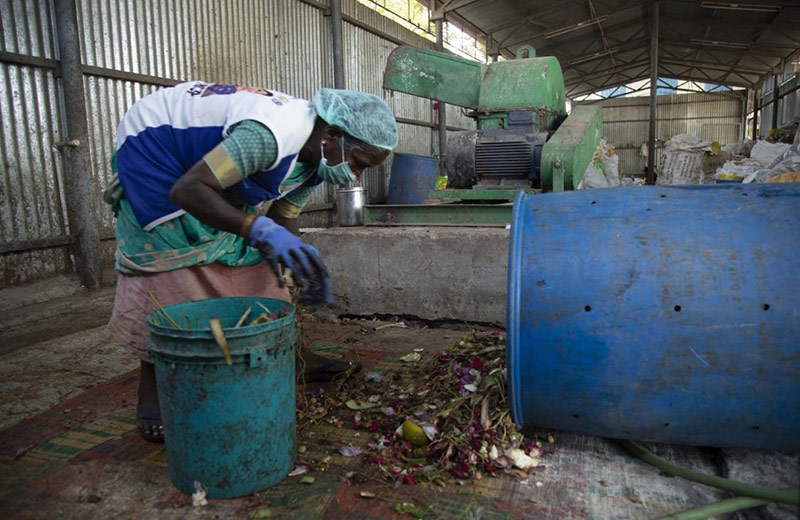 A woman sanitation worker at a compost unit in Tiruchirappalli in Tamil Nadu. Photo: Sabari Pandian

A focus group discussion led by the Indian Institute for Human Settlements, an academic institute in Bengaluru, in Tiruchirappalli found that approximately 65% of sanitation workers in the city corporation were women between the age group of 30 and 58.

The study team facilitated 19 focus group discussions in which ten were conducted among the occupational groups and the remaining nine were among generic groups including men, women, youth boys, and youth girls – the children of sanitation workers, between May and June 2019.

Interviews conducted by the Tamil Nadu Urban Sanitation and Support Programme (TNUSSP), a technical support unit of the government of Tamil Nadu, with women sanitation workers in Coimbatore and Tiruchirappalli. They found that every woman sanitation worker of menstruating age suffered from bruises and infection every month. They also suffered from stomach cramps, hip and leg pain every month, but continued to work.

The TNUSSP team in Coimbatore also found similar health issues arising from inaccessibility to adequate WASH facilities. Twenty-five-year-old Rekha* said that the last two months were excruciating for her because of the extra hours of work she had to put in. In view of the COVID-19pandemic, sanitation workers had to work from 6 am to 6.30 pm.

“It is difficult to push the tri-cycles given to us to collect the garbage,” said Rekha. “A circular stone is fixed instead of the tyre in the front wheel. It is hard to move the vehicle even when there is a small hurdle. It becomes even harder to push this vehicle during my periods.” 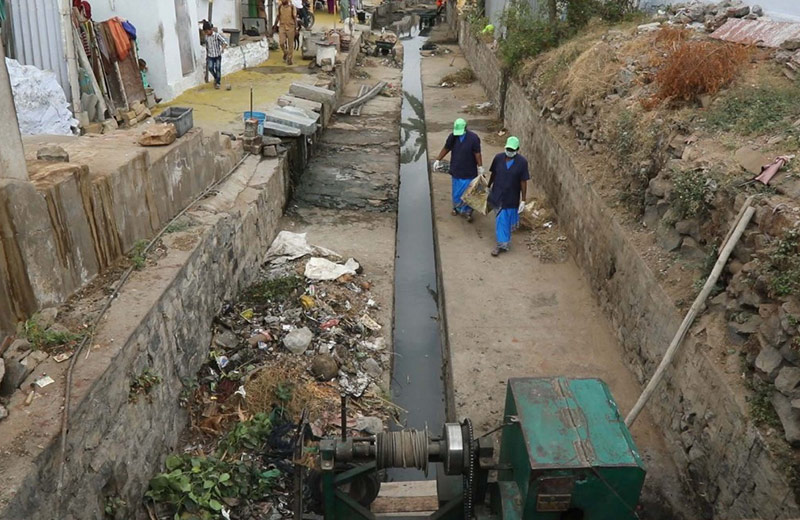 Rekha collects garbage from at least five streets. “It is difficult to change pads during work,” she said. “There are not many restrooms on the streets where I collect garbage. I change the sanitary napkin only when I reach home. Since my home is closer to the place I work, it is easier for me to walk home in the afternoon to change.”

The women sanitation workers expressed their inability to work for 12 hours and requested that be allowed to finish the work by 2 pm. Taking their requests into account, the panchayat reduced their working hours for women from 6 am to 2 pm.

The stigma surrounding menstruation has made it difficult for women sanitation workers to express their predicament to their superiors. Thirty-nine-year-old Suma*, a sanitation worker in Coimbatore, always hesitated to ask for permission or leave during her periods even when she suffered from rashes and infection because she was reluctant to talk about it with her superior.

“How can we talk about these things to the men?” she said. “What can we explain to them? I go home and rest. Since my mother lives with me, she takes care of the cooking and I do not have to worry about it.”

The focus group discussion held in Periyanaickenpalayam and Narasimhanaickenpalayam in Coimbatore in July 2019, found that knowledge about menstrual health and hygiene was low amongst sanitation workers. To increase awareness among women sanitation workers and access healthcare facilities, TNUSSP has organised regular health camps in both the districts in the last six months. 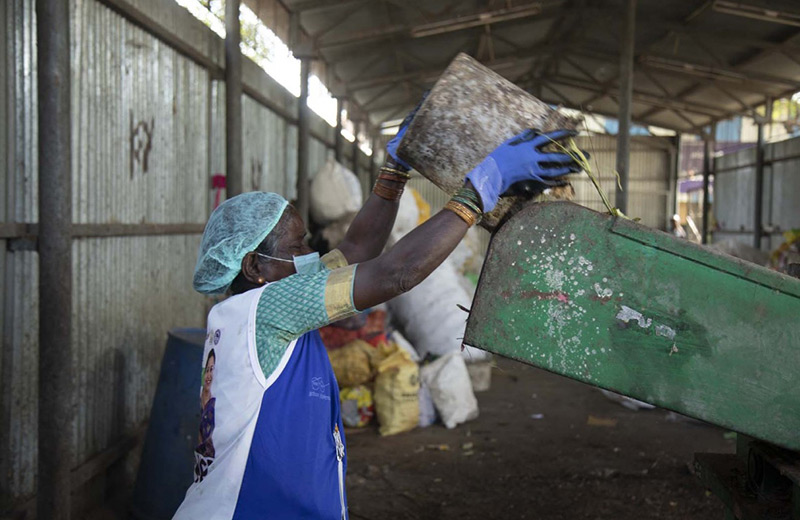 A woman sanitation worker at a compost unit in Tiruchirappalli in Tamil Nadu. Photo: Sabari Pandian

The UN General Assembly adopted two resolutions in 2010 and 2015 that recognised human rights to water and sanitation. The 2015 resolution laid emphasis on sanitation, calling upon states to promote women’s leadership and their full, effective and equal participation in decision making on water and sanitation management.

This would ensure that a gender-sensitive approach was adopted in connection with water and sanitation programmes. This ongoing pandemic has only reinforced the need for better WASH facilities for women workers.

Note: *Names have been changed to protect the identity of sanitation workers.